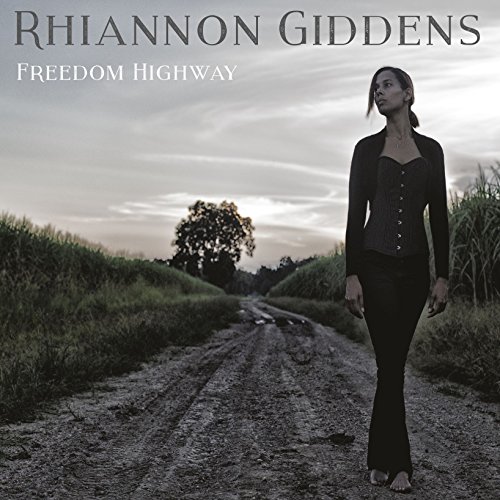 Wait a bit. The price is likely to go down. Track this price, and we'll let you know when it drops.

"Know thy history. Let it horrify you; let it inspire you. Let it show you how the future can look, for nothing in this world has not come around before. These songs are based on slave narratives from the 1800s, African American experiences of the last century, and the Civil Rights movement of the 1960s and headlines from streets of Ferguson and Baltimore today. Voices demanding to be heard, to impart the hard-earned wisdom of a tangled, difficult, complicated history; we just try to open the door and let them through." —Rhiannon Giddens

Freedom Highway, Grammy Award–winner and 2017 Grammy nominee Rhiannon Giddens' follow-up to her highly praised debut album Tomorrow Is My Turn, will be released by Nonesuch Records on February 24, 2017. The record includes nine original songs Giddens wrote or co-wrote while she and her band toured after Tomorrow Is My Turn's 2015 release, along with a traditional song and two civil rights-era songs, "Birmingham Sunday" and Staple Singers' well-known "Freedom Highway," from which the album takes its name. Giddens and the band will tour the U.S. in the spring; details will be announced shortly.

Giddens' writing for Freedom Highway is a departure from Tomorrow Is My Turn, which included one original song, with the rest being her interpretations of songs written or performed by a wide variety of female musicians. Giddens co-produced Freedom Highway with multi-instrumentalist Dirk Powell in his Breaux Bridge, Louisiana studio, with the bulk of recording done in wooden rooms built prior to the Civil War. As producers, Giddens and Powell sought to release the stories already in the walls, allowing the space to be a voice in itself. This approach allowed for an emotional fearlessness and presence not always easy to achieve in the studio. Together they assembled the players, which included her superb touring band, local musicians from the bayou, a soulful horn section from New York, and talented family members. The principle recording was done over an intense eight day period. The result is an album that is rawer and more personal than its predecessor.

Giddens wrote of the title track:

"I am a daughter of the South; of the white working class, of the black working class; of the Democrat, and the Republican; of the gay, and the straight; and I can tell you one thing—we are far more alike than we are different. We cannot let hate divide us; we cannot let ignorance diminish us; we cannot let those whose greed fills their every waking hour take our country from us. They can't take U.S. from US—unless we let them. I recorded this with Bhi Bhiman, all-American singer-songwriter from St. Louis, whose parents are from Sri Lanka. America's strength are her people, whether they came 4,000, 400, or 40 years ago, and we can't leave anyone behind. Let's walk down Freedom Highway together. Written by Pops Staples in 1965."
Category Hierarchy